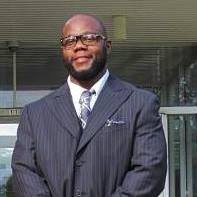 Leon Abdula El Amin, formerly known as Leon Duane Wilson, is a Flint resident and a formerly incarcerated individual. He is the founder and executive director of the M.A.D.E. institute.

My organization is the MADE Institute. M.A.D.E. stands for money, attitude, direction, and education. We are a 501(c)(3) nonprofit organization whose mission is to provide comprehensive programming in the areas of workforce development, transitional housing, urban farming, life skills, mentorship, advocacy, research, and financial literacy for formerly incarcerated survivors. We were established in 2015, here in Flint.

A: Healing, for me, is a combination of things, not just physical healing, but mental and psychological. I think being a survivor of violence and crime... we, as a community, have never really had the opportunity to heal from a lot of our wounds. So, healing to me is when an individual has the resources that they need to become productive individuals, and get their lives back in order after experiencing traumatic events in their lives, whether it's from gun violence, incarceration, et cetera. Also, not only just having resources to be productive citizens, like job training, substance abuse, mental health, housing, and things like that, on the physical aspect, but also healing to me is  psychological. I think oftentimes we overlook the psychological aspect of healing, and I think that's critical.

Q: Has anything come up for you during this pandemic related to your incarceration?

“It's really life or death.”

A: I normally don't really think about prison so much. It's been 10 years for me but during this crisis, I've had a dream or two about incarceration and I'm always in contact with individuals who still are incarcerated through my JP, and through the program, and so forth. I had a dream about the first time I went to prison, going through the process, going through quarantine, and I had a dream of when I seen a man hang himself. I was in Jackson Penitentiary. This is my invitation coming through the system and a guy hung himself off the tower. They had an emergency lockdown, and I had a dream about that. It's been a long time. Another thing that touched me was talking to some guys who actually got it (COVID-19) in the Lakeland Facility, which was  one of the hardest hit areas here in one of the prisons in Michigan. I was thinking about it and I found myself drifting again, and just imagining being in that situation with COVID. It's really life or death.

Q: How would you define violence and do you think that there are aspects of this pandemic that you would consider a form of violence?

“Whether it's the Flint water crisis, whether it's police brutality, all these other things, these things that have been hitting us, I feel like that is an act of violence that's perpetrated through white supremacy and systemic racism.”

A: In Michigan, African American people account for 14% of the population, but make up 33% of the state's confirmed coronavirus cases, and 40% of deaths. Nationwide, Black Americans represent 13.4% of the population but continue with higher deaths. This is from the US Census Bureau. Whether it's the Flint water crisis, whether it's police brutality, all these other things, these things that have been hitting us, I feel like that is an act of violence that's perpetrated through white supremacy, and systemic racism. They're perpetuating that violence on communities of color and it's taken this long, and we still haven't put things in place to heal these communities.

So, until we do that, it's always going to be an act of violence coming from the government, and coming from those who adhere to white supremacy, and systemic racism. On a personal level though, when I think about myself, man, and just being a victim of gun violence, being shot in my head, and my back by the same individuals I used to run the streets with, seeing in these times, seeing young folks coming in and out. Just a week ago, we had 100 shots fired off at one of these pop up parties they've been having. 100 shots in one night, 12 people hit and they're still counting up the deaths and people were still trying to hang on.

I just did an article in the New York Times getting ready to come out and I mentioned the effects of the Flint water crisis with the lead, the Legionnaires, and the bacteria on the development of a lot of these individuals. This was five years ago and we're looking at a lot of the individuals who are the perpetrators are 17, 18. So, you count by five years. This was right during the hit of the Flint water crisis. I think all of that is playing a role in the violence that we see here in Flint I think across the board, and in different urban communities as well.

Q: The conditions pre-COVID were already horrific for us in our communities, right? And then you combine that with the blatant murdering of Black and Brown people, and COVID, and a lack of response to the impact of COVID on the lives of Black and Brown people specifically and it's just crazy how we're able to just deal with this. You know what I mean?

“We're just trying to survive and we're never given an opportunity to thrive.”

A:  I call it the perfect storm. COVID was the perfect storm because it reveals so much more. It made everyone equal to it. It didn't matter if you was rich, poor, white, Black. It humbled the world and it made us have to really look at ourselves, look in the mirror, and really look at what's going on without all the distractions that we get from entertainment, TV, music, or whatever. People really were forced to pay attention. And when you pay attention, as a lot of us are, and those who remain conscious of it, you see the underlining things that were already there, that we're still trying to survive up out of. Whether it's the lack of economic inequality that we deal with, the miseducation, the mass incarceration, the gentrification, the police brutality, and then here comes COVID. We're just trying to survive and we're never given an opportunity to thrive.

Q: What are the ways in which you want to see your community come together after this pandemic?

A:  What I would want to see in our community, is more unification across the board. I would like to see more of the generation now, 40 and under, given opportunities in leadership positions. I would like to see more of the old guard being more of a counsel to that leadership. I want to see more resources poured into the community, into grass roots organizations like M.A.D.E. Institute, and those who are really doing the work on the ground, and really reaching the survivor population, giving real opportunity, and resources, and funding, to sustain programming, to really begin to see the community change, and take shape in a more constructive, more positive light. I think it's going to take these organizations, like ourselves and others, to really drive what the new Flint, in a sense, looks like. What it can be. The possibilities.